Do you wish you were one of those super-hydrated people who drink a gallon of water a day?

Realvolve has a new tool to help solve the nagging problem of inbound lead assignments for rainmakers.  The zapier.com integration was designed to allow a specific user to be assigned as Record owner on inbound leads but lacked a way to spread those leads over multiple realvolve users.  The new "Record Owner Assignment" feature is instrumental in closing the gap in the original zap design and opens a variety of options for to lead assigment, including "Round Robin"!

Selecting a realvolve user from the dropdown list will cause that individual user to be assigned as the record owner of the each new lead. 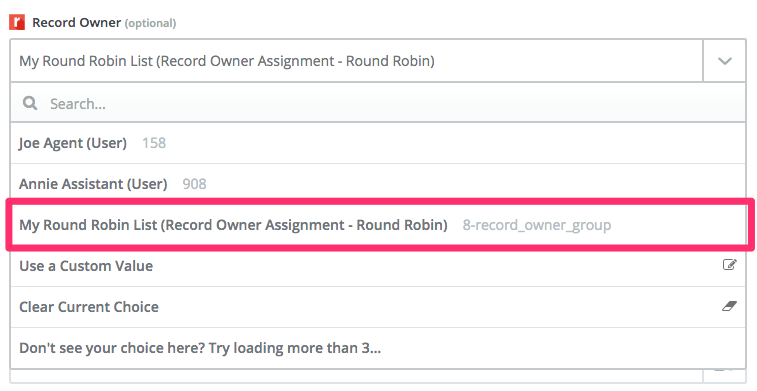 In addition to assigning individual record owners to leads, you can now assign ownership from a “list” of realvolve users in 2 ways using our new “Record Owner Assignments” feature.

To setup Record Owner Assignments for use in Zaps:  Go into your Realvolve account and select SETTINGS > RECORD OWNER ASSIGNMENTS

Administrators of your account have the ability to Add/Edit users to lists - non-admin users can only see the lists.

STEP 2: Give the list a distinctive Title that represents the list of users in this group.  In this example we name it "My Round Robin List".

STEP 3: Choose between ‘Round Robin’ (shown above) where each name will be assigned in the order which it is displayed or ‘Multiple Owners’ where all names will be assigned at one time as record owners.

STEP 4: Next, Select the users that will be in this list and use drag/drop to change the order if needed. There is a "x" to the right of the user name's that are added so that you can also remove names form the list.

STEP 5: Press [Save] once everything is entered as needed.

Once you have the list created then return to Zapier and select the "My Round Robin List" in the "Record Owner" field of the Realvolve Action.

Assigning leads to your Realvolve users in zaps couldn't be easier!  The round robin option keeps lead assignment fair and even among all.  When you need to change which users are in the list, simply go into the Realvolve settings and make the change.