Do you wish you were one of those super-hydrated people who drink a gallon of water a day?

In 2002, the Oakland A's won the American League West in one of the most improbable seasons in MLB history. Many know the story from the popular book and movie Moneyball.

The A’s found success by focusing on the details of the game. They didn’t have star power, but the sum of the right players was far more productive than any one or two all-stars.

What does this have to do with real estate and your business?

Dale Warner, COO of Realvolve/Firepoint and a leading sales innovator/accelerator for multiple Inc. 500 companies, recently conducted a webinar in which he shared how real estate agents can apply this powerful Moneyball principle to their businesses. Dale also shared how he builds his team around this process to maximize sales results—and how you can do the same.

In this blog post, we'll share a recap of what Dale discussed. You can also rewatch the webinar here.

Dale began the webinar by suggesting that we should be running our real estate businesses the way the Oakland A's manager ran his baseball team—by looking at the statistics, ignoring what other teams overvalued, and putting together a team of solid and consistent players.

The Oakland A's in 2002 won the American League West in one of the most improbable seasons in major league baseball history. They had no budget. They were competing against these big teams with gigantic budgets. And when you compare their budgets on a graph, it's crazy how little money they really had. But the A's found success by focusing on recruiting people that were just solid, consistent performers. And a lot of the bigger teams got these stars that were really, really good and they spent a lot of money on those people. The As didn't have that much money to go around. They just made sure everybody on the team had decent enough stats so that the sum of all of those stats across a season would equal success.

There was a book and a movie about it. Hope you've seen it. It's great movie with Brad Pitt. But really, that different way of examining the game and their business, which was their baseball team, proved to be successful for them, and it was all about the statistics. So let's dive right in.

Most agents (and their CRMs) focus on leads. We focus on followup.

Here at Realvolve, we focused first on automation—not on leads—as the emphasis for our CRM platform. There are a lot of CRMs in the industry that focus on leads first and they're about lead generation and lead conversion. We can do that, but our primary focus was on time savings, around automation and efficiencies. That means there's a lot of automation, like I said, around transactions and listings. There are also a lot of automation around past client follow-up, and around your sphere of influence follow-up, around past client events, client appreciation events, and other things that happen offline.

The Hard Way (the way most agents do things)

Dale urges agents to be proactive, not reactive, in the way they run their businesses.

Most agents rely too much on a large inflow of internet leads. Most agents' businesses do the bare minimum when it comes to customer service. They plan as they go, and they stay in react mode 90% of the time. Rather than anticipating problems and growth, they react to what's in front of them. So as soon as their business starts to dip a little bit, they're thinking, "Oh, I need more leads, more leads, more leads." And as soon as they get really busy, it's "I've just got to keep up with the next deadline."

That's a plateau. You can't get out of that cycle of up and down every single year if you don't start working more on the proactive side of the business. Stop, plan ahead, build out systems, and think about automation so you don't have to scramble to keep up every month.

What Should Your CRM Be?

To moneyball your real estate business, your CRM should be a well-oiled machine, configured to keep your team performing consistently.

Configure your CRM for an above average agent on an average day. Build a well-oiled machine.

We're not going to wake up in the morning and say, "I'm building this system as if I am going to be super motivated every single day to go kill it and have an awesome day." What I do is I build it for an above average agent and I'm above average, and I want my team, everybody on my team, to be above average. But I want to assume that it's an average day. I have an average level of motivation, an average level of energy. So, I need that system to remind me to do things as if I'm having a hard time keeping up so that I never get off track. It should feel like it's over communicating on a day where I'm really sharp and I'm on top of it.

It should also be a safety net to ensure nothing falls through the cracks.

Your CRM should hold each agent accountable to a base level of communication with your clients. That's what I call a safety net. The team leader should be able to view how each team member is performing against the automatically prescribed followups, that safety net. So we get a safety net in place, which is just some basic drip campaigns, some basic reminders about my clients, when their birthdays are, when their home purchase anniversary is, when their wedding anniversary is, and maybe one email a month indefinitely that we're just at least touching them and communicating with them.

Your CRM must also be a safety net for yourself, as team leader.

Let's face it, during some of the summer months, like what just happened in June to a lot of our businesses, we get a little crazy. We're busier than we thought we were going to be and it's really hard for us to keep up with the fundamentals of staying in touch with some of our past clients, reaching out to the people that give us the most referrals. So, if we build that basic automation when we don't have time to think proactively about things, we can still keep up with our clients. We can still make all the touches, all the followup that we want.

Too many agents undervalue their clients

And a lot of our businesses, we forget how valuable our clients really are. We know the value of a lead because we can see the ROI. "I bought X amount of leads five months ago and two of them have turned into buyers for me," or something like that. So it's easy to do the math. It's much more difficult to do the math on these longer-term relationships.

Following the moneyball principle, Dale dug deep into statistics. Then he applied his own calculations (he inserts a disclaimer as he presents this during the webinar—"This is just my math. It's not gospel because your market is going to be different, but these are just averages that I pulled from the National Association of Realtors data, US census data and some other data sources.")

Dale produced this chart that demonstrates the potential value of focusing on your existing clients. He emphasizes the lifetime value of a client, which includes multiple transactions with that client, as well as any referrals they may bring you. 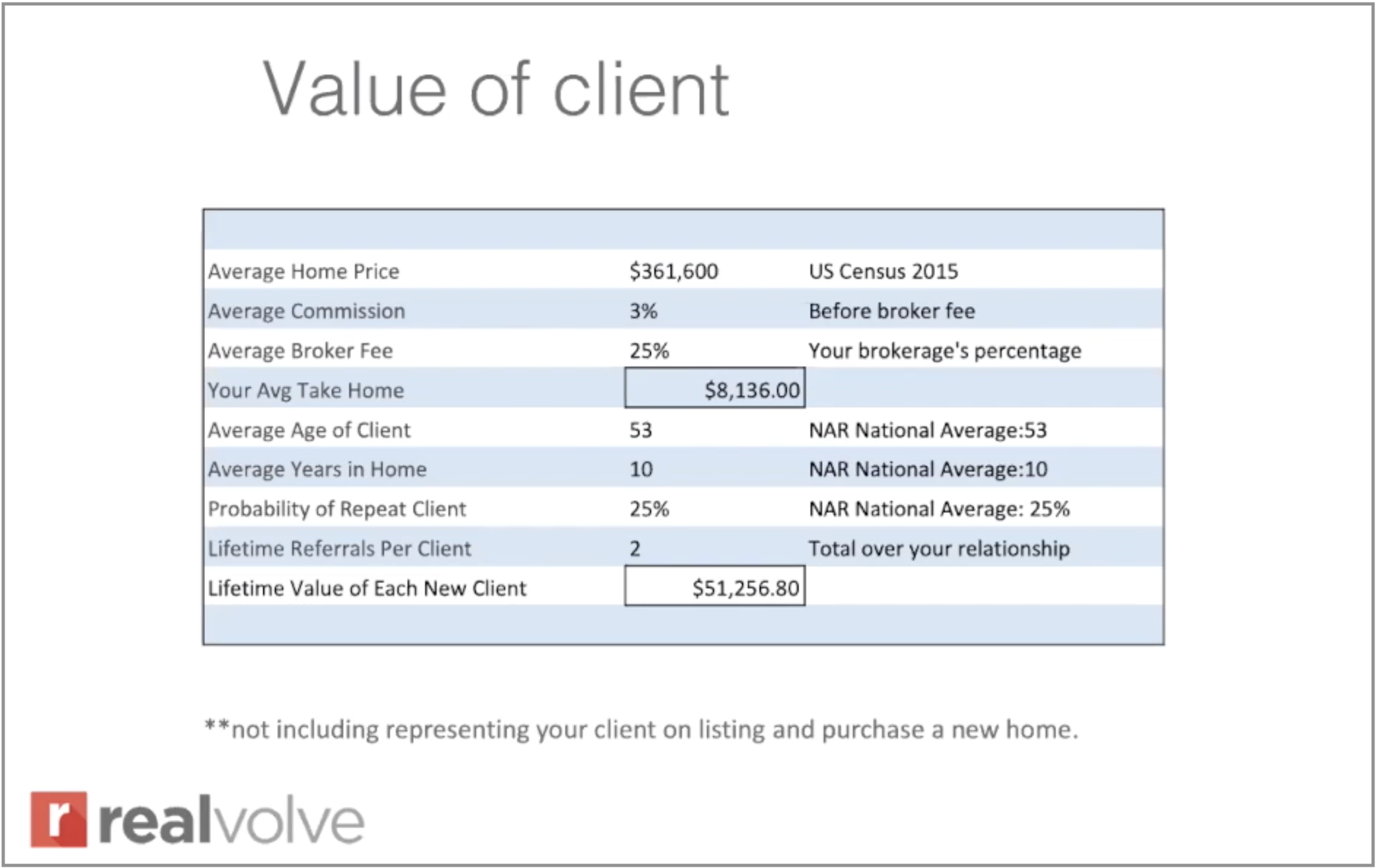 Probability of a repeat client, NAR says the national average is 25.

And then lifetime referrals per client. This is where the math gets a little fuzzy because there is no data (that I could find) on how many repeat deals a client does. And so I just said two, based on the average age of a client and the average years in home. So between now and the time that person turns 70, on average, probably two referrals that you're going to get from them.

Lifetime value of each client then is 51K.

Then Dale poses some important questions:

How much total time per week are you spending on one-on-one conversations with people that are not current clients?

If we have a mature business, more than five years in the business, shouldn't we be spending 85% of our time following up with our past clients, having one-on-one conversations with referral partners? 10 hours of prospecting, 30 hours of clients, and two hours of past clients.

So, how do we apply the safety net (CRM) to moneyball our business?

My challenge to everybody on the broadcast today would be to categorize your best 5,200 contacts in terms of probability of repeat and probability of giving your referrals. You should have a way to designate that in your CRM. Flag them somehow as an A client or as your top 50 or your top 100.

What do you want to be tracking and how are you tracking the repeat and the referral deals? If I ask you, go back to 2019 and tell me how many deals you did that came from referrals and who did that come from and how many repeat deals did you do and how much were each of those clients worth, could you whip up a spreadsheet really quickly based on your CRM that you're using? If not, you should think about that and evaluate whether you should switch or add in some measurements or just change the way you're tracking things in your business.

With those top 50 or 100 contacts that you've identified, do you have a basic automation in place? I always say that every single person in your database should be on some campaign of some type. Little reminders to reach out to them, automatic emails that are going out.

Watch the webinar to discover more!

Sammy Harper is a regular contributor to the Realvolve blog. In addition to a decade of digital marketing experience, she's spent the last five years immersed in the world of real estate and CRM. Fascinated by the real estate industry and inspired by agents’ stories, she vows to provide only the most valuable of content to help agents thrive.

How to DOUBLE your transactions WITHOUT trading your time for money

9 Strategies To Help Your Client Win A Bidding War