Why real estate agents must BE PRESENT with clients... especially during tough times!

My second job out of college was with an incredible analytical instruments company. We offered technologies for detecting impurities in purified water. It's now a much larger and more successful company, but at the time it was just a tiny division of GE Water (now SUEZ) with a huge vision.

I got the job because the sister of my wife’s childhood best friend was friends with one of the hiring managers for this small company. I was en route back home from a work training at the Denver Airport when I received a call from the sister that would end up changing my career path—and my life.

The job gave me a passion for working alongside scrappy, smart people. It taught me how to tell a compelling story, and it introduced me to some dear life-long friends. And I have one woman's network to thank for it all—a network that likely took her a lot of time and energy to build (especially because this was before the boom of social networking).

The lesson? Well, this one connection taught me that casting a wider, more open network can unlock opportunities you never knew existed. And that networking is an unparalleled skill for real estate agents, both young and old.

To help you hone your own networking abilities, check out the 9 tips below.

Realvolve’s founder and CEO, Dave Crumby, has an expression I revisit every time I think about networking: Be shockingly helpful.

Starting here will fundamentally help you rethink how you network. If you begin with the intention of meaningfully helping 5 to 10 people each month, your bar for who you reach out to and the value you offer goes up, as does the quality of the potential interaction.

Start with a list of who you can help in your immediate network, and once you’ve warmed up your shockingly helpful muscles, expand your network each week. Doing so will pay significant dividends over time for more meaningful relationships.

2) Roll the dice with Eventbrite.

A problem with the very nature of networks is that we are all inclined to self-select based on our own interests and existing habits. But doing the same things over and over will give you the exact same results—you’ll just keep meeting the same people.

To combat this, try rolling the dice with Eventbrite! Search for events happening in your area in the upcoming week and attend the third event that shows up on the page (or pick your lucky number as you see fit).

If you’re the more traditional sort, look at the events board at your local coffee shop and attend the event that represents the furthest possible departure from your current comfort zone.

Whatever you do, resolve to go, enjoy the new experience, and say hello to five new people.

3) Flip your social network on its head.

If you look at a scatter plot of your connections on LinkedIn, Facebook, Instagram, and Twitter, chances are your network lines up roughly to past jobs you’ve held, schools you’ve attended, and places you’ve lived.

It's safe to say that our social networks have a significant impact on the content we consume and share on a regular basis. That said, the constraints of your existing network often create a virtuous closed loop.

Try following 10 new (non-real estate) people on Twitter and LinkedIn this week. But instead of taking the algorithm-suggested options, identify a few people who are experts in things you know nothing about.

Just the act of following them will expand your perspective and lead you to adjacent people you otherwise never would have discovered.

4) Don’t rely on your best friend.

I found myself revisiting an old podcast about networking called The Strength of Weak Ties. The whole premise of the podcast is based on Mark Granovetter’s research in the mid 1970s that revealed a vast majority of people got their jobs or clients through people they occasionally or rarely saw.

While the process of getting real estate referrals has changed significantly since 1973, the importance of passive connections has not: it’s rare that your best friend will refer you to your next client, but much more likely that an old classmate, neighbor, or friend of a friend will.

Given that, set a weekly reminder in your calendar to reach out to someone you haven’t spoken to in six months. 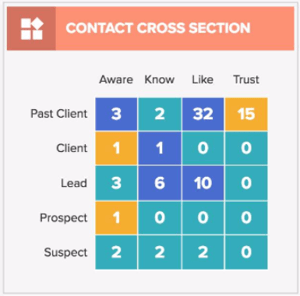 When you assign statuses (suspect, prospect, lead, client, past client) and stages (aware, know, like, trust) to your contacts, this information populates the Contact Cross Section on your Realvolve dashboard. This gives you an overview of who resides where in your database, and how well those relationships are developed. Your suspects who are aware of you and know you would be great targets for a Passive Connections Outreach campaign.

Your outreach could be a simple hello or an invitation to coffee, but those tactics often result in unread emails and canceled plans.

Try this instead: Ask folks about the best thing they have read or listened to lately. Doing so is friendly, flattering, and frankly not as boring as typical professional correspondence.

I’m amazed at how many people will spend an entire event with people they already know. The whole point of leaving your office or town should be to meet new people or learn new things, right?

To ensure you always make the most of it, approach every event you attend with a plan.

Start by searching the event agenda and hashtag to identify people you’d like to meet. Then challenge yourself to connect with each of them.

Instead of joining the packed crowds of people talking to speakers after they conclude, set up time to talk to speakers a few hours before they go on stage.

Can't snag time with them? Go the "shockingly helpful" route and create compelling blogs about their talks to help spread their message.

Don’t believe you can make it happen? Here’s me and Seth Godin—before and after his keynote talk on being remarkable!

In her book, Why Not Me?, Mindy Kaling suggests that you “make a list of the people you think would make the greatest mentors and try to get close enough to steal their Wi-Fi.”

While her approach is tongue-in-cheek, most of us have people we admire from afar for their smarts, insight, or ambition (Exhibits A and B above). But we never approach them.

If you’re in this boat, I recommend checking out our blog post on overcoming fear of rejection or watching Jia Jiang’s TED Talk on the subject. Based on his experience facing rejection first hand, Jiang warns that fear of rejection leads people to ultimately say “no” to themselves.

Don’t let fear of rejection prevent you from building a large open network. Instead, create an ambitious list of people you want to learn from and identify creative ways to make it happen.

Most often, people forget to network until external signals suggest they do so. (The Holiday Hustle, anyone?) For example, when a real estate coach ends her speech, we crowd to her to make an introduction, and then reach out on LinkedIn shortly thereafter. Or, when someone gets a new high-powered job at a great company, we send a congratulations text message.

While these approaches are fine, they rarely open up new channels of communication simply because they transpire en masse.

Try this unconventional approach instead: Rather than sending out December holiday cards that'll likely get lost in a pile, send St. Patrick’s Day cards!

Another idea: Instead of sending a card, try one of these pop-by ideas!

Identify one creative way to take the networking road less traveled and seize the opportunity to meaningfully engage with someone new. You’ll stand out from the pack of other real estate agents and increase your likelihood of success in the process.

If you’re like most busy agents, your calendar is packed with obligations, listing meetings, team discussions, and transactions. Block out an hour on your calendar each week for networking so you’re guaranteed to spend time on expanding your network.

9) Ask your friends for interesting connections.

Ask a friend, “Who is the most interesting person you know?” Then ask them to arrange an introduction via email so you can start a conversation with this new contact.

Sometimes these conversations will lead nowhere, but many will generate new ideas, connections, and creativity, so it’s worth the break in the action from your usual busy day and real estate agent grind.

Ready to grow your network?

Large, open networks have the power to create countless opportunities for connection, real estate business growth, marketing creativity, and new partnerships. Yet most people put off networking because they view it as arduous or a waste of time.

I think it's just the opposite. And after hearing my story, I hope you're with me.

Quoting Sonia Sotomayor, "To succeed in this world, you have to be known to people." You never know who will be your next referral—or who will change your life—and it's never too late to get started.

So what are you waiting for?

What's the best networking advice you've ever received? Share your thoughts in the comments below!

Jon Yourkin leads marketing operations and sales enablement at Realvolve and designs high performing marketing processes to accelerate revenue growth. With a strong background in internet marketing and funnel management, he excels at building scalable integrated campaigns that leverage cutting-edge marketing techniques. Although performance is at the core of who he is as a marketer, he believes real estate agents need to create predictable and scalable processes to build a sustainable business.

Realvolve Training Event: Everything you need to know

Why real estate agents must BE PRESENT with clients... especially during tough times!

How To Build Trust With Your Real Estate Prospects & Clients

5 Strategies for Connecting More Deeply With Your Real Estate Clients